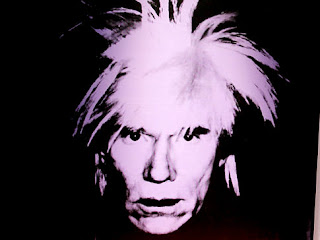 Pop art. People's opinions are torn over whether this is genious and a creative new idea for the postmodern age, or whether it is a load of rubbish. Others believe that pop art is worth way more that it is worth to look at. Pop art is post modern as it has created a new version of art which is original and new, as well as combining both high art with low art. Andy Warhol's art work is post modern as it uses bricolage to combine both images and writing within artwork. 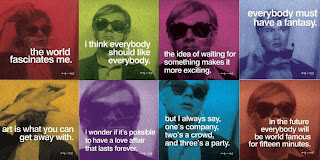 Andy Warhol's most famous pieces are Marilyn Monroe screenprints, deteriating throughout the continueing images in many rows of the piece, as many of Warhol's work is collages of layers of images. This shows the destruction and breakdown of Marilyn Monroe as her fame and publicity increased. Andy Warhol's work concentrates on the idea and concept behind his work, rather than the realism which had been dominant in years before Warhol's work became famous. Where art work is only considered as 'good art' when based on a realistic scene. As Warhol was one of the first pop artists to occure, people were shocked yet intrigued at this new upcoming style of art. Andy Warhol blurs the lines between high art and popular culture, as his pop art has both the combination of images and writing, which was new and original at the time. Another key piece within his portfolio is his 'Campbell's tin soups as shown below. 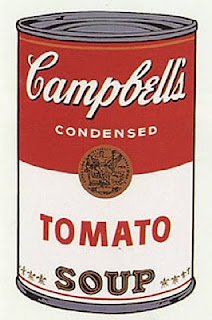 Andy Warhol's work interpreted as style over substance because for what the art actually is, bold colours and simple shapes. Some people argue that for what pop art is, it isn't worth the amount which it is sold for. Some believe that you are buying the label of Andy Warhol rather than a buying an original and a generally good piece of artwork. The highest price which was ever paid for an Andy Warhol's painting is $100 million for a 1963 canvas titled 'Eight Elvises'. Only a handful of artists are able to sell their work at this bench mark price. 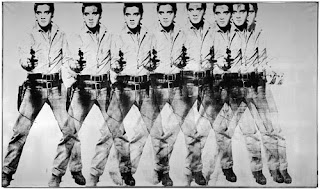 In 2009 an article in The Economist, Andy Warhol was described as the 'bellwether of the art market'. Pop art was a drastic change within the art world. Pop art appeared after World War 1. Pop art changed the many critics opinion on 'What is art?', suddenly art has become outrageous, with the use of bold block colours rather than the traditional realism which has been dominating the art world for thousands of years. 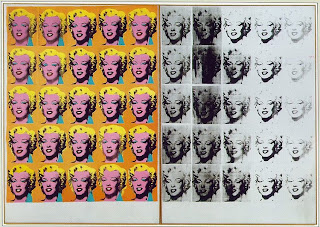 Marilyn Monroe had a huge influence on Andy Warhol's portfolio of work, with the combination of both screen prints and collages. Stinati's 5 confusions over time and space can be an example of why this work is postmodern, as Marilyn Monroe is no longer alive, and therefore people are still worshiping her image through Warhol's work. Another one of Strinati 5 which can be taken into account while viewing Warhol's work is the decline of the meta-narrative as the idols which Warhol has captured within his work include famous celebrities such as Marilyn Monroe and Elvis Presely. This is a change from previous art work, for example from the Renaissance perioud, where the art work is based around God and the Catholic Church. This shows that the meta-narrative has changed from a religion bringing a community together and to celebrities being people's idols and someone that brings the community together and gives them something to look up at. The bright colours of Marilyn (1976) seem to be vivid and are intensified to appear more powerful and standing out. The vibrant colours used makes it unreal to the audience. Surrealism is a key post modern factor, as it confuses the audience
Self Reflexivity - As well as using other images such as celebrities, tins of soup and fruit, Andy Warhol also creates photograph's collages and screenprints of his self-portrait within his portfolio. This is postmodern as instead of allowing the media and public to create an opinion of Andy Warhol, he is taking that priviledge and independance away from them by creating these images himself. He wanted to portray a creative image of himself, which stands out from everyone else, you have to agree that he does stand out. Personally, when I think of Andy Warhol, I picture this mad looking bleach blonde haired middle aged man with fashion glasses. 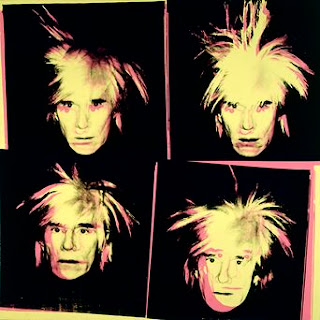 Jameson believed that a post modern text is when the relationship between the signifier decreases. He believed that the images lose their significance and become just images. Jameson's arguements are clear when looking at Warhol's work. Andy Warhol's work uses well-known images, famous faces and masterpieces from the past, such as Leonardo Da Vinci, Mona Lisa. Warhol recreated this paiting, calling it 'Thirty are better than one'. The overuse of the Mona Lisa image decreases the link between the original masterpiece. Mona Lisa has already been created originally by Da Vinci, Andy Warhol loved and admired this masterpiece which Da Vinci created and therefore he wanted to enhance it more, but not taking credit for the original image. However some people argue that this work isnt orginal as he isnt creating a new piece, but recreating a masterpiece which was created by someone else. However on the other hand, some may disagree by saying that he is creating a new piece of art work out of an original. 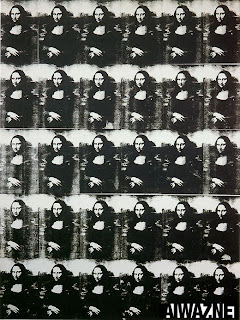 The breakdown distinction between high art and low art (popular culture) - thinking of high art, people often Monet, Picasso and Rembrant. whereas for low art many people think of pop artists such as Andy Warhole, Tracey Emin and David Hockney. People believe that drawing and painting is high art, whereas computerised images as low art. Andy Warhole however combines the both, as some of the images which he uses, such as the celebrities (Marilyn Monroe and Elvis Presely) and the high art of Leonardo Da Vinci and turns into low art of pop art. Pop art is often known as very simple, that anyone is able to manipulate images to look like pop art style by using bright bold block colours, which is what makes Pop art Low art.
Posted by Millie-Rose at 19:20